We’ve discovered a Twitter thread that exposed a member of the US Marines, 20-year-old Mason Edward Mead. What was lacking, however, was a full doxx. So after some digging, here’s what we could find.

We had a name to go on and his location, so we browsed social media and some online tools and discovered this. He has a Facebook page and he has some pictures that match those he posted on Twitter, and he engages in anti-Semitism in some of his comments. 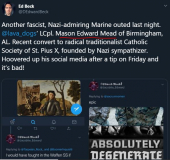 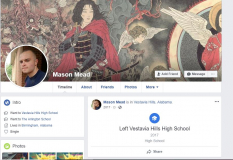 He lists Vestavia Hills high school as the one he attended, and when we search for him we get a match, as well as his current address: 7490 Kings Mountain Rd., Birmingham, Alabama.

We’ve heard elsewhere in Twitter posts that his fascist posts have been sent to his chain of command and is being reprimanded, though, we’re not aware of what will ultimately come of this situation. We’ll put out more information as we get it.