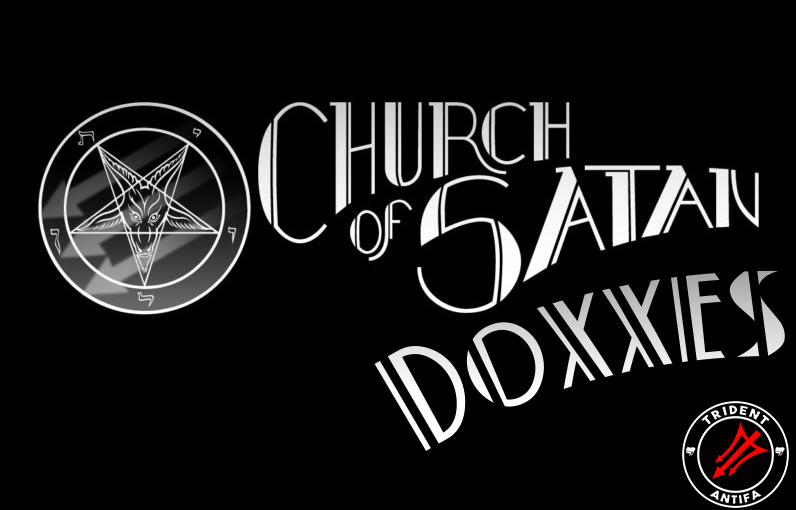 Last time in our #ChurchofSatanDoxxes series we exposed Church of Satan fascist Kenaz Filan. Continuing with part two, we’re going to be exposing clergy member magister Kevin I. Slaughter. You can follow along with this series on Twitter with: #ChurchofSatanDoxxes.

On Church of Satan Hierarchy

Before we reveal Kevin, we’d like to establish his rank within the organization and provide context as to what “magister” and “magistra” mean in Church of Satan hierarchy, as well as detail this hierarchy.

When one joins the Church of Satan, they’re classified as a “Registered Member”. For those members who wish to take up a more active role within the organization, there’s an application the member can submit applying to become an “Active Member”. If one’s application is accepted, the member then enters into the Church of Satan’s hierarchy and is ranked as “Satanist, first degree”. There are five degrees in total within the hierarchy:

If the member properly follows satanic principles to the satisfaction of the administration and keeps them up-to-date on projects and success in living satanic philosophy, the member may become elevated to the second degree, which basically indicates them as a step above an “initiate”, showing they grasp the philosophy and have potential to become clergy. Third through fourth degrees are Church of Satan clergy titles, meaning the member has been ordained and is an official representative of the organization, having demonstrated thorough understanding of satanism and displayed great success in living satanic principles. The fourth degree, the title of magistra or magister, is the equivalent of a cardinal in the Catholic church and is the highest degree one can attain in the Church of Satan, right under the maga and magus, fifth degree, which is reserved exclusively for the high priestess and high priest who are the heads of the organization.

Now that Kevin’s rank and its meaning has been clarified, let’s take a look at what kind of person he is. First, Kevin runs the Satanic American accounts on Facebook and Twitter. The Satanic American is a space for right, far-right, and alt-right Church of Satan members (and sympathizers). The page (and in the post, Kevin says satanism itself) is entirely and specifically a far- and alt-right phenomenon, being a reaction against the establishment, which Kevin believes is the left. In his own words:

This project came out of years of observing the Satanic milieu and noticing a significant shift to the Left in implicit points and assumptions made in Satanic aesthetics, discourse, and analysis of current events. We also notice a lack of biting humor that attacked current orthodoxies. [. . .]

Today the Left is the Establishment, that is indisputable. 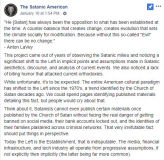 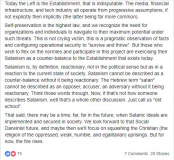 In the post, Kevin says, “Satanism is, by definition, reactionary, not in the political sense but as in a reaction to the current state of society.” Unpacking this briefly: the logic of this sentence breaks itself down and the dishonesty reveals itself, as any reaction “to the current state of society” is necessarily a political one. To claim, as the Church of Satan does, that Satanism is apolitical dishonestly overlooks the fact that ideology doesn’t exist in a vacuum, and this claim smacks as a dull attempt to dodge responsibility for the views and actions of the Church of Satan’s problematic members.

Additionally, the rightwing and, more broadly, fascism has always been reactionary. But even if we grant Kevin’s argument, he’s still wrong by LaVey’s own account. Satanism itself as codified by LaVey and practiced by the Church of Satan is entirely reactionary in the political sense, as it was a “reactionary counterbalance” to the liberal and hippie counterculture of the 60s. Instead of fostering the “free love” hippie ideology, the Church of Satan championed discrimination and elitism. It aligned with proto-fascist ideas like elitism, fixation on order and “natural order” (and appeals to nature generally), strength and vitality, ridiculous ideas about social Darwinism and the law of the jungle (the strong survive), toxic masculinity, heroism, individualism, and egoism. This puts LaVey’s satanism on the right and it tends to lean far-right at times, as evidenced by LaVey’s own views on things like gun control, where he rallied for a police state.

Browsing the Satanic American Facebook page, we see all kinds of far- and alt-right talking points. In judging by the content, it wasn’t much of a secret that Kevin’s a fascist, but at times Satanic American content goes full-on explicit fascist, such as one post alluding to the fourteen words, a white supremacist slogan, and another that advocates for eugenics. It’s also no surprise that Kevin is a transphobe who thinks that those who are transgender have a mental illness. 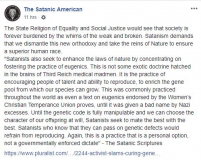 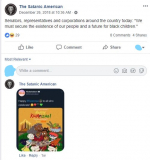 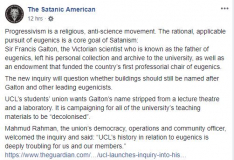 We can see through his posting of memes his more misanthropic character. We can also see that he posts blatant racism and he’s a believer in pseudo-scientific “race science” or “race realism”. He also has posted a link from fascist site Counter-Currents. Additionally, Kevin has a weak ego and such a fragile sense of masculinity that he thinks the critiquing of toxic masculinity means that he has been stripped entirely of any resemblance of masculinity and that such a critique is an affront to his personal character. 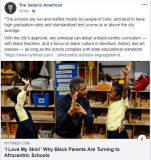 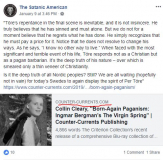 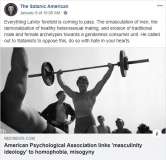 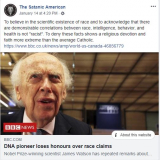 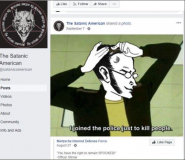 Kevin has also shared content from Facebook account No Lives Matter, which is run by fascist James Porrazzo. We’ve covered James in our series on TST. 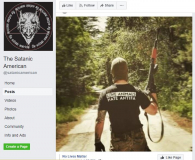