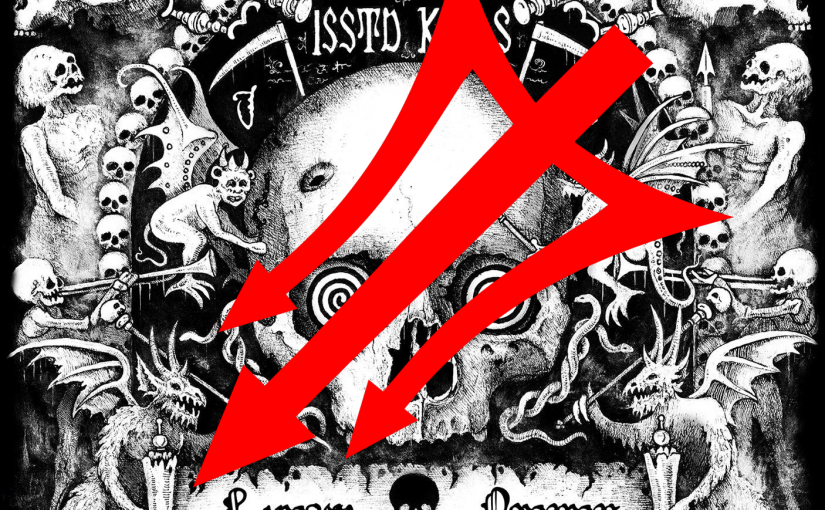 The Satanic Temple’s Grey Faction is a temple project that aims to debunk Satanic Panic era conspiracy theories about Satanism, such as Satanic ritual abuse, and they debunk pseudo-science in mental healthcare practices that contribute to Satanic Panic style conspiracies. It’s important to mention at the outset that calling out and debunking conspiracy theories and pseudo-science in fields of study is an important and morally good action, as it can negate or mitigate tangible harm due to delusional or irrational beliefs in these fields. It must be wholly clear here that our criticism isn’t aimed at Grey Faction for their pro-science activism; on the contrary, we’re science advocates and we believe in science education and the defense of science against the delusions and woo peddled by religion against scientific literacy and progress, such as creationism, anti-abortion woo, and anti-vaccination pseudo-science. What we do have a problem with, however, is the problematic and alt-lite views that Grey Faction director Evan Anderson exhibits and, moreover, the general alt-right nature of TST. TST is demonstrating itself to be problematic on all fronts, and Grey Faction is merely a recent and small feature of the overall whole.

The Satanic Temple is a crypto-fascist organization which is headed by a Zionist nationalist, Cevin Soling (Malcolm Jarry) and is represented in the media by crypto-fascist and alt-right advocate Doug Misicko (Doug Mesner/Lucien Greaves). It’s entirely consistent with TST behavior that other fascist and alt-right/alt-lite sympathizers in the organization are permitted to espouse bigoted and crypto-fascist talking points, and we’re here to highlight this behavior and call out these crypto-fascists and fascist sympathizers. So, let’s take a look at Grey Faction director Evan Anderson and see just what kind of person he is.

For starters, let’s look at this piece which is full of hot takes and assorted strawmen. The whole thing reads as if it could have been penned by Milo Yiannopoulos or Dave Rubin (or now for a limited time only, bonus problematic character Ben Shapiro). It echoes prominent talking points in conservative and alt-right spaces, such as the fetid “facts over feelings”, “the left care about feelings over facts”, and “the left consists of a bunch of uptight church ladies who are easily offended over everything”.

The problem of the left’s preoccupation with microaggressions is indicative of their concern with subjective experience, narrative, and feelings over research, objective facts, and the process of real social progress.

In lieu of leveraging science and data to help solve serious, catastrophic, well-documented disparities between the races, far too many liberals are engaged in witch hunts against professors, academics, and universities whose views — often based on research — they find deplorable, uncomfortable, even sacrilegious. The extent to which we concern ourselves with imagery and narrative is the degree to which we neglect to identify and mitigate the suffering and disadvantage of those for whom we advocate.

In the same piece, Evan argues that the Left shouldn’t focus on “symbols” (his scare quotes) of oppression such as Confederate flags (which are fundamentally and patently racist and oppressive to black people and other people of color) or hate speech. He also puts forth the absolutely absurd assertion that racist beliefs themselves aren’t a problem and says calling out oppressive and racist people is unfair because they’re “downtrodden” people who have been prevented from obtaining “equal opportunity”.

The left’s focus on the “symbols” of oppression — like flags and words — necessarily results in less attention on what ought to be the end game: providing equal opportunity for all. Instead of viewing bigoted statements from a racist uncle as relatively benign artifacts of a long history of oppression against black people enshrined in law, these liberals view the beliefs as the problem itself. Even further, they view those who espouse those “incorrect” beliefs as oppressors, preventing the downtrodden from obtaining equal opportunity.

(Note his usage of quotes around “incorrect” beliefs. These “incorrect” beliefs include racism, genocide, eugenics, LGBTQA+phobia, and the use of violence against marginalized people based upon skin color or gender/sexual orientation. The useage of quotes around “incorrect” is a tactic that attempts to invalidate critiques of racism, fascism, and bigotry, and anti-racist/anti-fascist actions. This is akin to fascists criticizing the Left for attacking “wrongspeak” or “wrongthink”. It’s a dishonest argument that tries to justify and defend bigotry. It’s a dogwhistle, and Evan is unequivocally guilty of engaging in far- and alt-right rhetoric.)

Oh, and get this: he believes that the KKK isn’t an actual problem that actively brings violence to vulnerable communities. He puts forth the same empty argument heard in far- and alt-right spaces that says calling out racism is itself spreading racism.

Centuries of sexist and racist laws — which, by and large, have since been overturned — are responsible for the continued lack of equal opportunity between the sexes and races. The problem is not the Ku Klux Klan, it’s the residual effects of generations of extreme disadvantage.

In the end, there’s no “oppression” without an “oppressor.” Perhaps the modern left is invested in keeping the latter around, lest there be no more struggling victims for whom to “advocate.”

This same line of unreasoning can be heard by TST co-founder and spokesperson Doug Misicko in his attacks on anti-racists and anti-fascists: “antifa”, “the ignorant little assholes who run amok lighting fires, smashing property, and macing bystanders in the face,” are truly the ones who are giving oppressive people a platform and publicity. The rhetoric doesn’t seem to spread farther than the echo chamber.

On Twitter, Evan has tweeted about Instagram being a good place for nazis due to nazi propaganda not being against its terms of service. At first glance, the post seems to be sarcastic, ending in “Nazis rejoice!” However, given his KKK and confederate flag apologetics, as well as other content we will address in this article, the tweet comes across as distasteful. 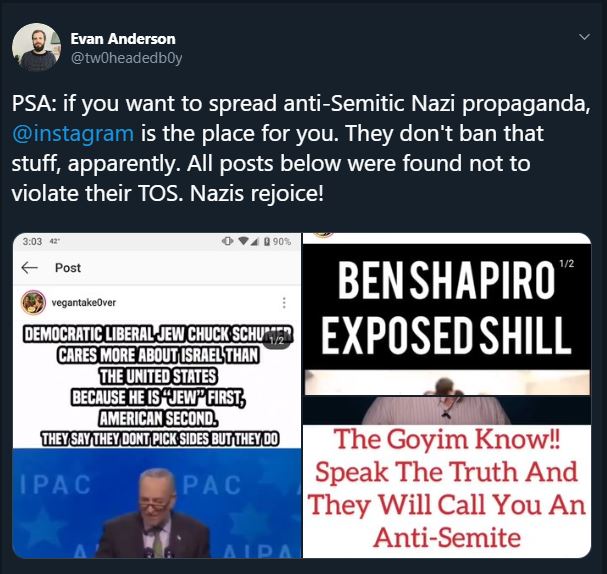 Evan also appears to be a writer for the site Quillette, a reactionary centrist outlet. It’s problematic for the obvious reactionary hot takes pieces, and some avowed fascists, like Matt G. Paradise, like to link articles from there that further their narratives. From a piece he wrote back in 2016, Evan not only sets forth generic centrist points such as “both sides are bad” false equivalence (which, to be sure, liberals aren’t leftists) and calling advocates for social justice “the regressive left” for supporting multiculturalism and diversity, he downplays Islamophobia in modern discourse (with the use of scare quotes) by overlooking racist and xenophobic behavior that gets couched in critiques of Islamic texts. For evidence of this, one needs to look no further than the rhetoric of bigots within Patriot Prayer, Proud Boys, or confederate and patriot groups. Even secular humanist atheists have problems with Islamophobia in their circles, such as Sam Harris.

In the same article, Evan seems to have a great time by waxing condescending toward PC culture, that is, a culture that fosters inclusivity, diversity, and no toleration for hatred. Anti-political correctness is another favorite talking point by alt-righters; just ask every single Church of Satan nazi we’ve exposed. He even hints at transphobia and TERF (trans-exclusionary radical feminism) anti-trans drivel by bringing up “differences between the sexes”, though he doesn’t explicitly state what those differences are. He calls pro-PC advocates “extremists” and invokes an outright lie that the left is for some sort of authoritarian censorship. And, not surprisingly, he absolutely hates feminism, which is also a prominent far- and alt-right phenomenon–being an anti-feminist. He also thinks that it’s a negative thing for LGBTQA+ people to live in a tolerant and inclusive society, stating that the left won’t be satisfied until members of this community are accepted unconditionally by every last member of society. What an absolute travesty that would be, ay, having a society that accepts people for whom they are. Those goddamn radical extremist lefties and their work for such horrible things as an inclusive society! Outrageous, I tell you; outrageous!

In another article, he can be seen whitesplaining and attacking intersectionality (which is an intersectional struggle against oppression, strawmen be damned). Here, he can be seen dogwhistling “virtue signaling” and asserting that those pesky SJWs only do their work “to show how much of a good person they are.” Which, to be honest, is a non-issue. If people do good work merely for the sake of looking good, at the end of the day, good work has still been done (though, it’s true that the person ought to reflect on their motivations for doing this). If X donates an exorbitant amount of money to some trans kids who were harassed or had violence done to them, only for the sake of looking good, that money still went to good use and tangibly helped victims of violence. At any rate, by now Evan has clearly demonstrated himself to be anti-social justice and anti-PC. He’d be well adjusted in the company of other alt-lite circles such as Milo Yiannopoulos or Gavin McInnes.

Oh, hey, what do you know, he’s also tweeted with Islamophobic and “leftist authoritarian” sentiment. He’s retweeted hot takes from reactionaries The Amazing Atheist, Dave Rubin, and even Sam Harris (explains the content of his articles; they don’t just sound like ssomethingRubin could have written, Evan has taken up Rubin’s narrative). Particularly of note about the Sam Harris retweet, Harris links to an article that wails on and on about the problems of intersectionality. It’s quite common for TST members on Twitter having #intersectionality in their bios and tweets defending TST. He really wants you to know that he hates intersectionality. He’s attacked Women’s March leader Linda Sarsour as a fake feminist. He’s tweeted a link to an interview with transphobic sex neuroscientist Debra Soh (so much for merely borderlining on transphobia; he’s gone full TERF. Which, it should be noted, that TERFism is, and shares and a pipeline to, fascism, much like how anti-Semitism is a pipeline to fascism and is a characteristic of it. To be sure, Evan is a transphobe and he has no place being in leftist spaces.). He’s stoked fears of Muslims. He’s defended Jonathan Haidt from nazi sympathies and for centrism in general. Just like Doug Misicko, he’s rallied for the idea that fascists and bigotry should have a platform from which to harass and do violence to their intended targets. He thinks everyday feminism is satire and doesn’t want others to better themselves in recognizing and correcting bigoted behaviors they might have. He’s also deleted some tweets that downplay Islamophobia and another in which he makes a thinly veiled racist remark to Talib Kweli. 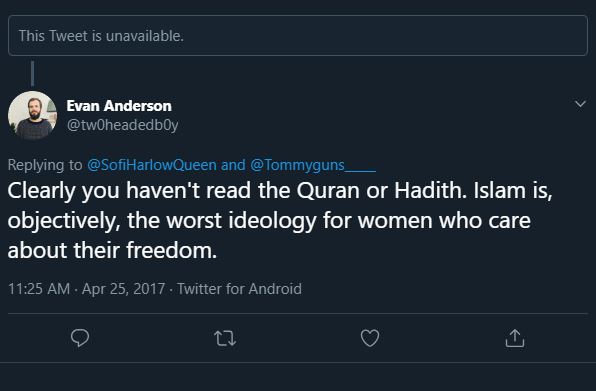 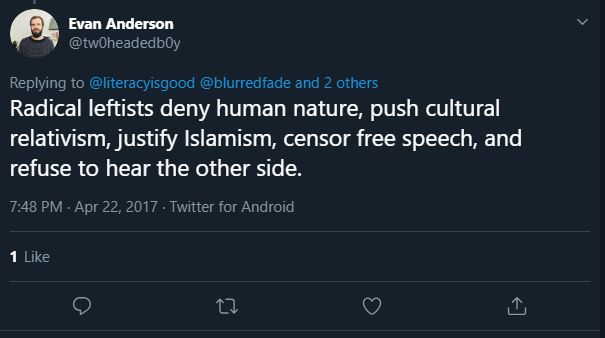 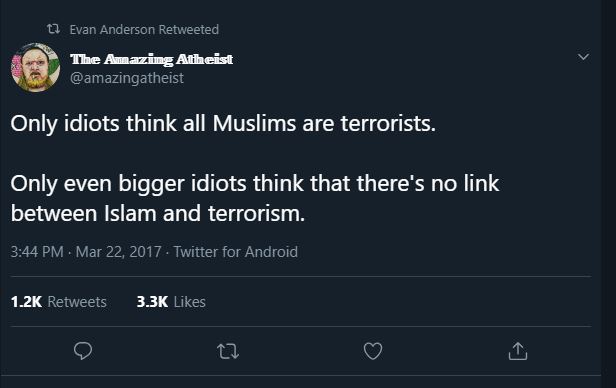 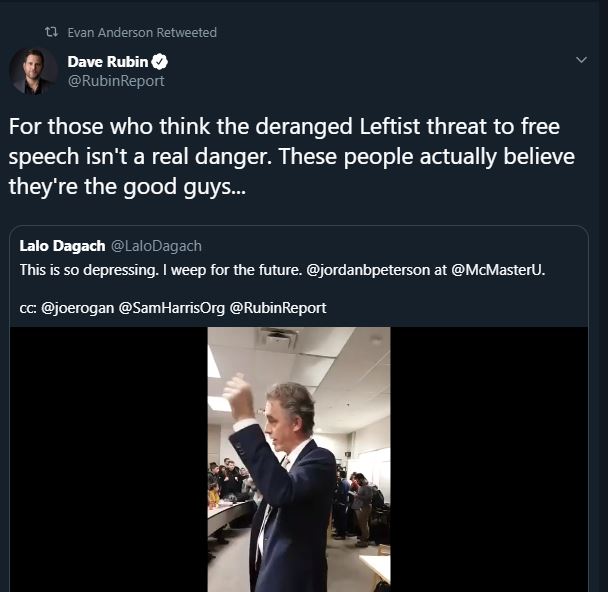 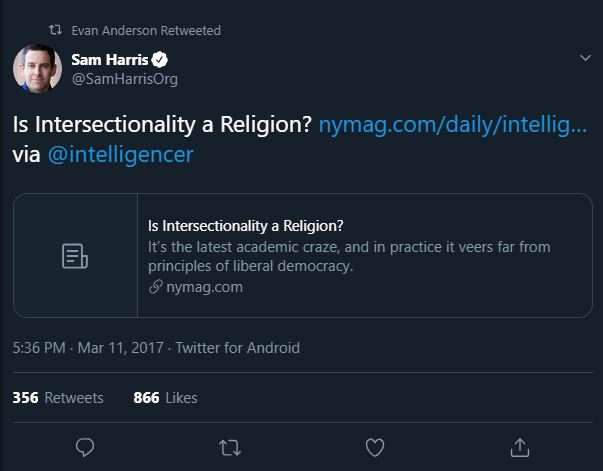 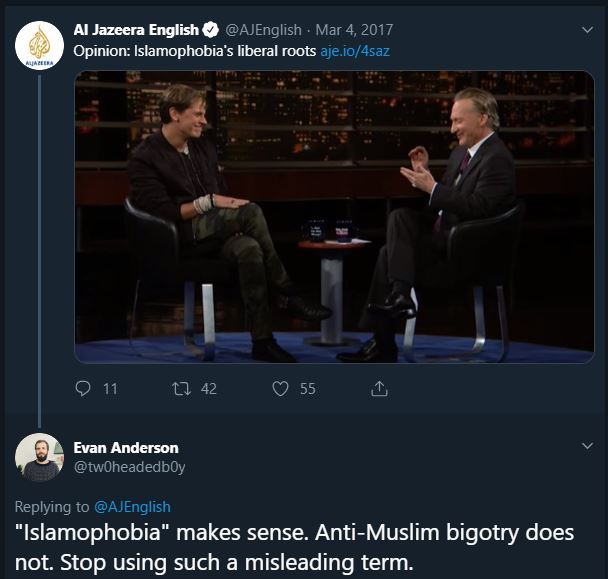 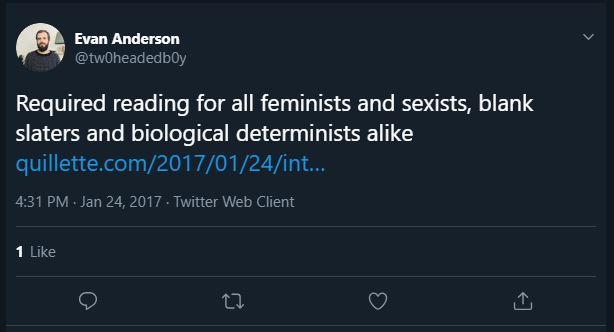 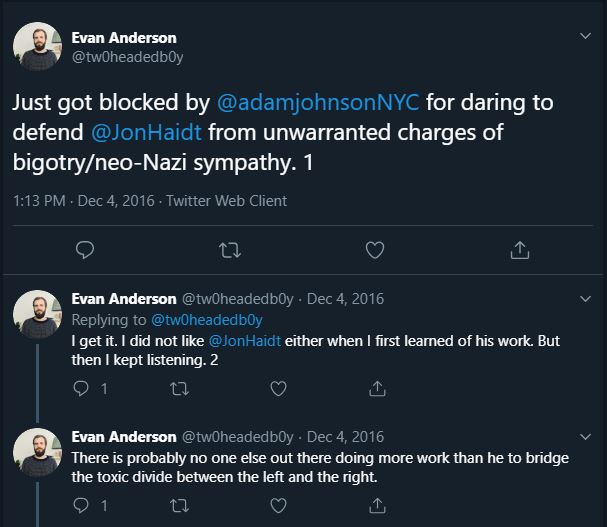 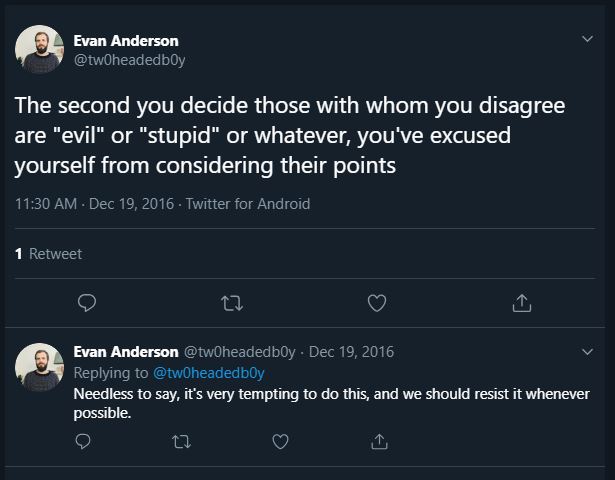 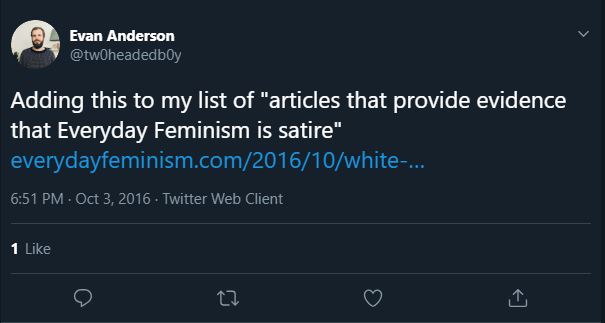 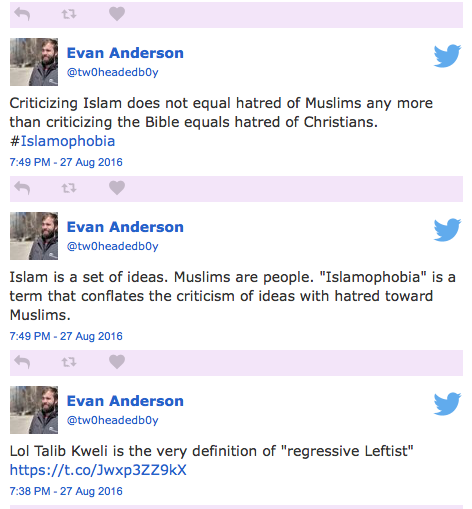 So taking stock, we’ve found that Evan Anderson is the director for TST project Grey Faction. Grey Faction is lead by someone who is anti-SJW, anti-PC, anti-intersectionality, who is a transphobe and who links to transphobes (which is ironic because he’s the director for a pro-science group against pseudo-science, yet holds to pseudo-scientific and bigoted views on trans people), who furthers far- and alt-right/lite talking points, who has no problem with the KKK gathering in vulnerable communities or even schools who hang the confederate flag (which is oppressive to black people and other people of color), and who wants fascists to have a platform to spread violence. This person shouldn’t be in a seat of power, especially for an organization that supposedly rallies for social justice (which Evan is against). As usual, we’re disappointed but not surprised in light TST’s crypto-fascism.